The Big Lie About CO2 by TLW - unanswerable disproof of the CO2 global warming theory using indisputable physics. The theory is dead but isn't buried yet. Help spread the word!

What Is the Antarctic Volcanoes Project? 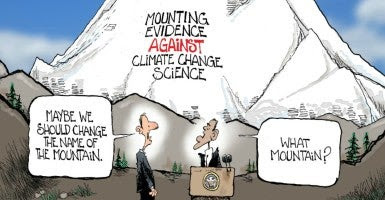 It's too bad the current brouhaha about CO2 is so narrowly focused. So what if a higher concentration in the atmosphere raises global average temps? If higher temps were accompanied by increased atmospheric moisture, it would even out around the world and turn it into a paradise planet, greening the deserts so that the teeming billions could be fed. Cold temperatures are inimical to life, not a goal of life.

Too bad, it might take a lot more CO2 than you think to really change the global weather, but not because it has any control over Earth's surface temperatures. In fact atmospheric CO2 can't melt an ice cube with its 15 micron radiation wavelength that has a Planck radiation temperature of -80C, the same as dry ice. Why do they call CO2 greenhouse gas? Because plants breathe it, and they pump it into greenhouses to help them grow and thrive. Polar regions and deserts look good in postcards, but who wants to live there. Meanwhile global pop. is zooming, so obviously the real answer is to pump more CO2 and water vapor into the atmosphere to turn the Earth into a greenhouse, turning deserts both hot and cold into lush green crop-growing regions like 35 million years ago when the avg. global temp was 88F and the CO2 level was 1K parts per million (vs. 415 PPM today). So what if we lose some desert polar regions and even some yummy coastline, the adjustments will be inconvenient but temporary, but I prefer shirt-sleeve weather to Frosty the Snowman. How many arctic animals can't adapt to a warmer climate? What animal needs to live in ice and snow and wouldn't like a vacation to Tahiti? They can lose the fat, hair or feathers.

The real question is can we make and keep the global CO2/H20 levels high enough, and for how long? Sooner or later mass global starvation will become unstoppable if world pop. keeps climbing, and this is the way to forestall it, if we act soon enough. Don't give me them Malthusian objections, give me some CO2/H20 solutions. I like a paradise Earth in the possibility window.

So, while the world is debating the horrors, extent or lack thereof of global warming caused by CO2, let's engineer the CO2/H20 solution to making the Earth a warm temperate planet from pole to pole with no deserts or ice wastelands, allowing vastly more food to be grown and turning poor nations rich. I DON'T mean a planet with wild swings between super-hot summers and super-cold winters, but one that is warmer than now everywhere, but moister and greener, with a giant network of plant life helping to avoid extremes. Since CO2 and water vapor are the keys, and the paltry amounts in the atmosphere need to be increased as soon as possible to turn deserts green and get the warming process off to a good start, but the new levels have to be maintained permanently, I'm looking to remote Antarctica (which is really a sea) as the most promising source for unlimited CO2 and water vapor generation, given that noxious emissions (sulfur dioxide, etc.) can be controlled.

This blog is for posting news on the world climate situation, scientific and political, along with my own articles. I'm sure it will start out with hardly any interest or followers, but I'm hoping that it will attract the smartest people eventually and in the end I hope for a global consensus that if it can be done it must be done.

So what is the Antarctic Volcanoes Project? My working idea is that an international effort to reactivate as many volcanoes in Antarctica as possible in an ideal location for distributing the CO2/H20 will produce the best and most cost-effective results. Sorry, one-worlders, it won't give you a license to override and control any country's economy, but if your country is suffering from lack of food you will be too busy expanding farming to care. Hence until I think of or hear about a better way to increase world CO2/H20 levels, this is my pet project. If you are a scientist, please climb aboard my AVP Express and let's make it happen.

It Would Be Funny If It Were's So Sad


It would be funny it weren't so sad, but when the scientists say "greenhouse gas" they are using a malaprop. It should be greenhouse GLASS, because that's why a greenhouse stays warm, by glass walls stopping convection of air and trapping heat. Yes, CO2 is pumped into greenhouses, but not for heating purposes, only to help plants BREATHE. So the whole sucker's game of "greenhouse gas" must truly be for the purpose of stopping more vegetation from growing and feeding the teeming billions. Is that their true goal? Another blip on the horizon is the promise of melting permafrost releasing gigantic amounts of CO2 from the Arctic not Antarctic sector. Let's hope we at least get some more good CO2 that way.

Aug. 31, 2011. Giant pipe and balloon to pump water into the sky in climate experiment

Part of the heat is coming from beneath our feet